I had my first bout of nausea yesterday.  I didn’t throw up, but I just felt ill after eating a handful of M&Ms at work.  It got particularly bad as I got home.  I sucked on some ginger candy and sat down for awhile with Fusilli, and the feeling subsided.  But I also had a bit of heartburn last night and didn’t really feel like eating much.

Up until now, I didn’t think I’d have any morning sickness feelings, but I can feel them starting.  I’m looking forward to asking mama what she went through, though it’s been so long since she was pregnant that I’m sure some of the memories are gone or mixed up or otherwise muted.  Three more weeks.

Graham and I are likely going to tell mama and papa shortly after the doctor’s appointment. Maybe even that day.  We were going to wait two weeks after that, but things just get complicated with travel and events and the like.

I like that my pregnancy is tracking the seasons.  My first trimester is roughly the duration of spring. Second, summer. Third fall.  I give birth right around the time that winter starts.

I’m going to the spin class tonight. I think it will be good for me to do. I won’t work too hard, but it’s been awhile since I’ve worked out. Not since before I found out I was pregnant.

Fusilli and Celosa are asleep as I’m writing this. Graham is working. It’s raining and has been for a long time. This was surprise storm, and a welcome one. We’ve needed the rain.

I spent a good hunk of the morning working in the yard, pulling stuff out from under the palm tree and trimming vines that are creeping over the fence.  It wasn’t hard, but it was time consuming and laborious.  I took it easy, limiting myself to two hours total. But it was necessary.  And I have a little more to do tomorrow.

Afterwards, I cancelled a yoga appointment, and Graham and I went to lunch and then to Marshalls to check out some of the baby stuff there. We walked away with three onesies. Terribly cute.

I’ve been nesting a little today, too. I purged part of my closet and drawers.  Some stuff, like the workout gear for high intensity workouts and skinny jeans, went upstairs to the attic for retrieval later.  Other stuff I just got rid of.  If it fit, but I just don’t wear it, I tossed it.  There’s enough room in the closet now for a shelf for the baby. Graham and I are storing the things we buy there now.  Over time, I’m sure we’ll make more room. But for now, a shelf is a big deal.  I have a dresser in the attic that will be for the baby, and my old bed is at the ranch.

Last night, we went to Barnes and Noble and bought a few baby books. We got the What to Expect…. and another one called Expecting 411 that is a little more casual. I’m reading that one tonight.

It’s not yet 9:30 and I’m already getting exhausted.  I knew that this would likely happen today, since I worked a lot this morning on the garden stuff.  It’s just always surprising how very quickly it hits me.  I’m going to try to hold out for 10:30, but I’m not sure that I’ll make it.

I went to Target today at lunch to buy a bra.  I went up a cup size. I’m not sure if I’m quite there yet, but I want to have it on the days I’m feeling more swollen than usual.  I also bought a maternity tee shirt.  It looks like an ordinary tee shirt, but it’s a little longer.  I’m sure that I’ll probably wear it quite a bit after the baby comes too.

After finding those things, I went to the baby aisle to look at all the stuff we’ll need. Strollers, car seats, pack-n-plays, carriers, toys, breast feeding equipment, bottles, monitors, diaper bags, pillows, bathtubs. There were dozens and dozens of things for the baby.  And at some point I’m going to have to start making decisions on those things.  Graham says we won’t have to buy it all; our friends and family will give a lot of stuff to us.  But we will still need a lot of it.

I broke down and bought onesie set for the baby.  It’s yellow and says “I’m new here.”  Unisex but cute for either sex.  I also bought a matching hat and socks.  It’s so weird to think that in less than a year, the little one will wear those sorts of things.

Last night, I crashed very hard.  I was working on the quilt, and suddenly fatigue just took hold of me.  I was somewhat taken aback by it, and I was in bed and asleep by ten thirty.

Tomorrow, I’m going to a yoga class. I’m hopeful that it’ll be useful.  At some point in my pregnancy, I can’t do exercises that require me to be flat on my back, but I don’t think that’s for a few months.

Tomorrow starts the fifth week. The little one starts working on building the internal organs, and by the end of the week, there should be a heartbeat, though it won’t be detectable by equipment for a few more.

We gave the pre-baby the name Ze Terror, in a French accent. It’s what our neighbors called Noir when he first met them, and it’ll fit for a baby that is causing us so much angst.

I ordered a birthday present for papa today.

He’s been wearing wolf shirts from The Mountain for a few years now, and it’s almost become a ritual for us to get him one for his birthday or Christmas or whatever. I think he wears them, in part, because they annoy mama. But now, everyone in the family has embraced the shirts, and we think of him immediately when we see one.

His birthday is right around the time that we’ll feel safe telling a wider net of friends and family about the baby. So Graham and I figured that if we got this onesie: 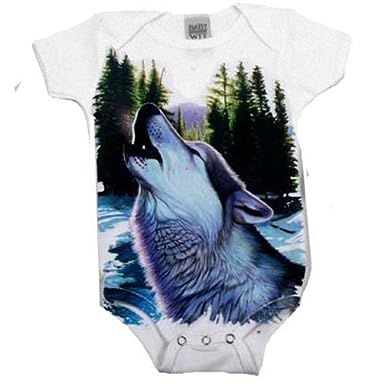 and gave it to papa for his birthday with another shirt for himself, he’ll be able to figure out what’s going on.

My drop of blood on Tuesday seemed to be a one off.  I haven’t seen any sign at all of any more blood since then. It scared me quite a bit, but I figure at this point that there’s not much I can do about it.  After I’ve seen the doctor, I think I’ll have fewer freakouts about miscarriage and the like, but I am relatively healthy, and it does seem like everything is moving along fairly well.

I noticed last night in the shower that my nipples are a bit darker.  My boobs are also slightly bigger, and I fear that I’ll be struggling with bras all pregnancy long.  And I’m peeing all the time.  Other than that, I am relatively symptom free.  I get tired earlier than usual lately.  But I don’t feel particularly bad, and I haven’t had any food issues or weird cravings of yet.

I have a two more days of my fourth week.  I’m sort of thinking that next weekend will be a bit of a milestone, as that’s six weeks, and supposedly that’s when you can start hearing the baby’s heartbeat.

Today was the last day that I’ll take my basal temperature.  It’s been pretty steady over the course of the last week, and it doesn’t really help me anymore.  I read that it can serve to unnecessarily freak people out, and after going through the drop of blood a few days ago, I feel that unnecessary freak outs need to be eliminated from my life.  So for the first time since late July last year, I won’t start my day by taking my temperature.  I never missed a single day.

I called Wooch today to ask what he thought of spin class and pregnancy, swearing him to secrecy about the baby. He said it was a really healthy thing to do for a pregnancy, and I should be sure to come every week. I shouldn’t work too hard, but it’s definitely one of the safer things to do.  I’ve been looking for a yoga class to join, but this silly heated yoga phase has taken over the city, and it’s damned hard to find one that isn’t hot.  Apparently that’s a no-no for pregnancy.  I’m going tomorrow at lunch to a class. We’ll see how that one goes.

I also decided to walk for my graduation from the School of Public Health. This is sort of silly, but I want a picture of my pregnant self in a graduation gown for our baby to see.  There’s one of mama when she got her degree from the same school. She was much further along with Olivia than I am with this little one (I’m going to have to come up with a pregnancy name: Graham is going with “demon spawn”, but I think I want something more original).   This kid will be able to see Daddy graduate in a few years, but I want mama’s education to also be intertwined with his or her sense of self.

I’m getting really excited.  Tonight, I’m going to start on a quilt for the baby. Something small and simple for a first quilt, but I’ll eventually make something big for his or her bed too.

Today, I saw a drop of blood.

Freaked the shit out of me.  It was tiny, smaller than any I’d ever seen before. But it was bleeding from where the baby is growing.  And that’s not supposed to happen until late December.

I googled like there is no tomorrow, and I discovered that it’s probably implantation bleeding, which can take a few days to travel down, even though that happened awhile ago. I’m a little less freaked out now, but I’m not as confident as I was, and I cancelled my spin class so I didn’t jar anything.

I’m sure it’s nothing. Or if it is something, there’s not much I can do about it.  I’ve gotten super careful about food. I try to exercise a bit every day. I’m not jarring too much.  I went to acupuncture this morning.  Everything I can do, I’m dong.

I also bought a onesie today.  It’s a wolf, and it’ll be the way we tell mama and papa that I’m pregnant.  I need to be careful not to buy too much, because I could go crazy and buy more than I necessary. Plus, I feel like I jinxed myself by buying something for the baby.  Of course, I also bought a Paddington Bear when we were in London for the baby, because I was certain that we must have gotten pregnant then.  I’ll be able to give that now.

We took another brand of pregnancy test this morning.  It’s also positive. It’s almost surreal, but it’s also a setting in.  27 days until my doctor’s appointment.  It’s such a long time.  I understand why, but sheesh, this is going to kill me.